Four months ago, the effects of the coronavirus pandemic on the Houston region were just beginning to be felt, but signs of an unprecedented economic disaster were taking shape.

In mid-March, when Houston Chronicle business reporters looked at the economic effect of the burgeoning pandemic, there were fewer than 100 new cases in Texas every week. Today there are more than 7,500 cases each week and more than 216,000 cases in the state. The signs of a growing economic disaster became reality. Businesses large and small closed permanently. Tens of thousands of people lost their jobs, some more than once as bars and restaurants reopened and closed again amid the recent surge in new virus cases.

Now with signs pointing to a long, slow recovery, we look at how the region’s economic sectors fared and what may lie ahead.

After struggling through the extended downturn brought on by the coronavirus pandemic, U.S. manufacturers are beginning to recover.

But there’s still a long road ahead for manufacturers in Houston that rely on China for materials and sales.

While China’s factories are ramping up, the pandemic is still hurting demand. Energy companies, for example, that usually buy products from Houston-area manufacturers have scaled back and are ordering less. 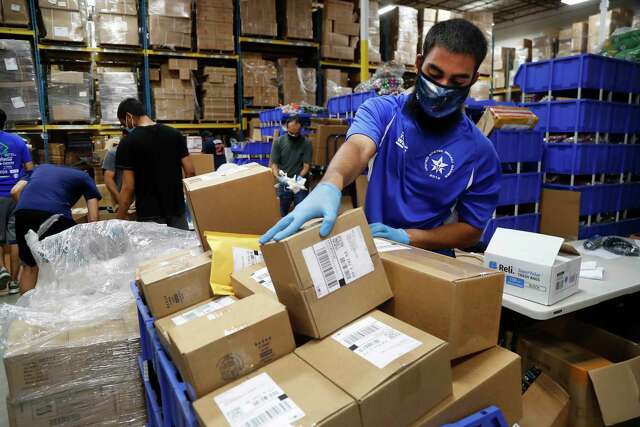 Ammar Dukka packs orders to be shipped out at Ionized LLC, a Sugar Land glow stick manufacturer that is now importing PPE from China for Harris County, on Tuesday, May 26, 2020 in Sugar Land.Photo: Brett Coomer, Houston Chronicle / Staff photographer

Local manufacturers have conducted mass layoffs in recent months. In May, the sixth month in a row with year-over-year job losses in the industry, there were 18,400 fewer jobs compared with same month in 2019.

Still, manufacturers were not hit as hard as other sectors by the local shutdown orders aimed at reducing spread of the virus. In a Dallas Fed survey, 70 percent of Texas manufacturers said no part of their business was shut down by government restrictions.

Marked by multibillion dollar losses and nearly 100,000 layoffs, the oil and natural gas industry is facing a “once in a generation clearing” caused by the coronavirus pandemic.

West Texas Intermediate, the U.S. benchmark for crude, plunged to negative-$37.63 in April, a historic low, as global demand for oil and its refined products plummeted.

The price has since rebounded to $40, but it remains too low for most producers in shale oil fields to turn a profit. A year after an average of 230 drilling permits per week were filed in Texas, weekly filings fell as low as 45 in May. 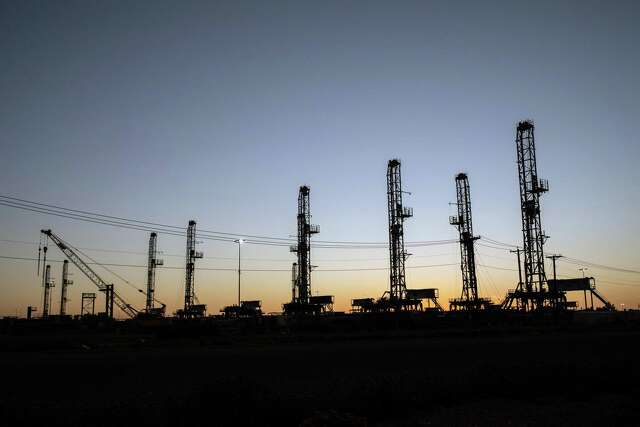 In Houston, home to many of the industry’s headquarters, many workers are still telecommuting as further virus outbreaks slowed or halted their return to offices. In the Gulf of Mexico, BP, Shell and other offshore operators struggled with COVID-19 outbreaks.

A 16 percent retail sales drop in April, at the height of the pandemic’s initial lockdown, was a history-making plunge. Then came the wave of bankruptcies.

National retailers like J. Crew and Nieman Marcus kicked off the Chapter 11 filings, then Texas brands like Stage and J.C. Penney followed suit, with Tailored Brands expected to file soon. Luby’s, the iconic Texas restaurant chain, has put itself up for sale amid lagging sales. National chains such as 24 Hour Fitness and Pier 1 Imports filed and started closing stores in Houston and beyond.

The Commerce Department’s latest data, from dollars spent in May, were heartening to retail analysts. But with coronavirus infections surging, the landscape has changed. Restaurants and retailers in Texas are still trying to recover from the first round of shutdowns while another looms.

“Now that will really cost us quite a bit, because we might have opened too soon,” said Venky Shankar, research director of Texas A&M University’s Center for Retailing Studies.

Consumer confidence had begun to return in May and June, he said, but “people’s confidence has been badly shaken” by the virus’ resurgence. 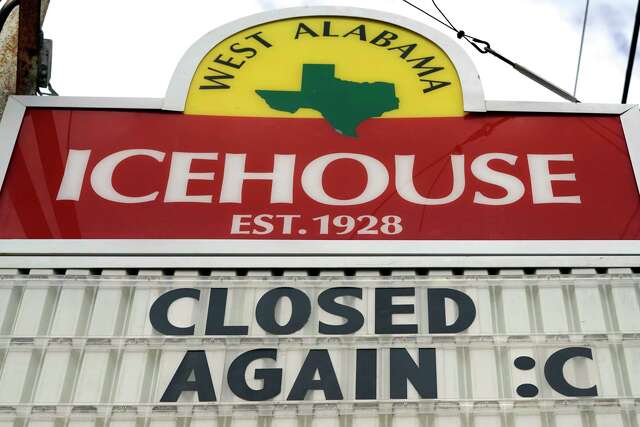 Some trends, like the rise of online and non-store shopping, which jumped 31 percent from May 2019, will probably continue.

Meanwhile, apparel and furniture sales plummeted 63 percent and 22 percent respectively from 2019 levels. Spending in those areas is discretionary, said Patrick Jankowski, senior vice president for research at the Greater Houston Partnership, and will likely remain low until job employment picks back up.

Food service will likely take the biggest hit in the coming months, said Shankar, projecting 12 percent of Texas restaurants will permanently close. Other hard-hit businesses will include salons, gyms and movie theatres.

Bars, which opened May 22, were ordered closed again June 26 as the number of new coronavirus cases exploded. The most recent shutdown leaves bars with no income after almost four months with just negligible sales and forces owners to get creative. Alba Huerta, owner of Julep, said she plans to launch a truck service that will deliver cocktails to your home.

Many Houston bar owners are calling on government leaders to provide some assistance during the second closing.

“You’re going to see a lot of mom and pops that have a lot of character not be able to make it,” said Adam Brackman, co-owner of Axelrad. “And it won’t be because they picked a bad location or they have a bad business model, or for any other reason than they’ve been forced to shut down without compensation.”

A recent surge in COVID-19 cases suspended re-opening plans for many Houston companies, some of which had begun to return to their office buildings.

Others are still determining whether to bring back all employees once the pandemic is over. Unless they have to, tenants typically aren’t shopping for new space.

“Companies are hitting the pause button. They’re not rushing in to make a decision,” said Dan Bellow, president of JLL Houston “The transactions in play are driven by lease expiration dates, not choice.” 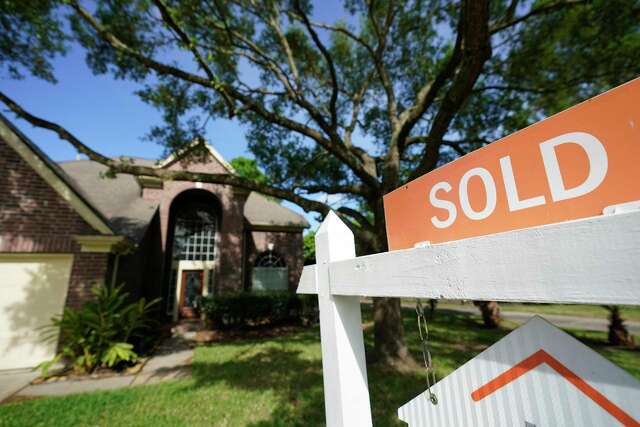 A sold sign is shown on a real estate sign outside a home Tuesday, March 31, 2020, in Spring.Photo: Melissa Phillip, Houston Chronicle / Staff photographer

Retail real estate has been harder hit as restaurants and stores had to shut down and many now are only operating at partial capacity. Many companies received government loans to pay rent and help stay afloat, but that money won’t last forever.

“We are finally seeing a few landlords making meaningful concessions to clients like restaurants and others disproportionately impacted by COVID-19,” said Lance Gilliam, partner in Waterman Steele Real Estate Advisors. “Those landlords are recognizing they would rather have a good tenant doing their best instead of a vacant space.”

In some ways, banks have begun to return to business as usual. But the progress has been anything but even, said Dan Bass, head of investment banking for the bank advisory firm Performance Trust Capital Partners’ Southwest region.

“It’s like one step forward, two steps back,” Bass said. He’s seen banks reopen, only to return to appointment-only policies or curbside service.

Underlying the recovery is both the question of what is safe for employees and customers as new cases of COVID-19 seemed to level out, only to resurge in June, and the question of whether customers will be able to repay their debts among amid the pandemic’s economic devastation.

Bass said he was more worried about bank’s loans to businesses than loans to consumers. “If the businesses aren’t open — or if, like hotels, they’re having little business — they can’t pay rent,” he said.

Health care might be essential to weathering the pandemic, but even the clinicians, pharmacists and home health aides keeping the workforce safe aren’t immune to economic losses.

The Houston metropolitan area’s health care sector lost an estimated 22,000 jobs from March to June, said Steven Scarborough, manager for strategic initiatives for the Center for Houston’s Future, a local think tank. While employment rates initially plunged, the sector has steadily regained jobs after two moratoriums on elective procedures and with the help of government aid such as the Paycheck Protection Program and CARES Act.

Smaller practices like independent pediatricians and pharmacies are at highest risk of shutting down or being bought out if the coronavirus pandemic continues, said James Langabeer, the director of UTHealth’s Center for Health System Analytics.

“That’s when the strong facilities really shine because they build up their acquisitions,” Langabeer said. He expects to see some sell-offs as the pandemic wears on.

Specialty practices such as dermatology and orthopedics also count themselves among the strongest companies, as they’ve been able to take advantage of telemedicine to see more patients.

Houston’s tech and innovation community has weathered the extended pandemic lockdown and restrictions better than most, its leaders say, largely because working remotely is in the sector’s DNA.

“There’s a general flexibility and resilience,” said Harvin Moore, president of Houston Exponential, a nonprofit that supports startup development organizations. “Their life tends to go on, even if it has become more difficult.”

Moore said startups may be struggling if their own customers are having revenue issues, though many are “already operating in a low-overhead environment.”

Some of the area’s tech accelerators, where startups previously gathered to collaborate and brainstorm, continue to offer distanced, physical office space. Jon Lambert, chief executive at The Cannon, said some folks had started coming back into their facility but have returned to working at home with the current surge of cases.

Nevertheless, the drive to build out a robust tech ecosystem continues, said Jan Odegard, interim executive director at The Ion, the organization building out the old Sears building in Midtown as a hub for tech activity. But it’s harder now to count on the future.

“I can’t plan for the next six months,” Odegard said. “I have to plan for a month at a time.”